Sign up for a free 14-day trial and join EditionGuard

Without a doubt, we have been eagerly discussing Readium LCP. Even more publishers and indie authors are opting to use Readium LCP. So deciding which apps for Readium LCP to use is an important choice. Because Readium LCP is an open-source DRM, it can be used with a variety of different reading apps. For example, EditionGuard now supports Readium LCP. And there are great apps available to meet your readers' needs.

One thing to consider when choosing apps for Readium LCP is the reviews. For example, the apps listed here get positive reviews from users. As well, they are part of the Readium community.

Why choose Thorium? According to EDRLab, “Thorium Reader is based on the set of open-source chrome-less modules. Thorium Reader relies on Electron.js, node.js and typescript, which are efficient cross-platform technologies.” In addition, Thorium is a free application. The Thorium app was developed by EDRLab. It is compatible with EPUB2 and 3, audio books in DiViNa (Digital Visual Narrative). Thorium provides enhanced support for the blind and dyslexic. As a result, books have become more accessible to these often-overlooked groups.

Why choose DITA? DITA is a member of EDRLab. According to EDRLab, DITA can develop white labelled LCP-compliant mobile applications based on Readium Mobile. DITA is an open-source publishing engine. DITA Reader is a free e-reader application supporting ePub, audiobooks, and PDF.

Vivlio was created by industry professionals in Europe. They wanted a viable alternative to Amazon and Rakuten Kobo. Their mission, to deliver the best ebook experience on the market. As a result, they developed an app to deliver an exceptional reader experience.

The Readium LCP community is growing all the time. In order to see the most updated list of apps for Readium LCP, visit EDRLabs.

As part of the non-profit Readium foundation, EditionGuard supports their cause. That's why we made Readium a DRM option available to all of our customers.

Readium was designed by publishers for publishers. As a result, they offer accessible, affordable DRM that optimizes reader experience. Learn more.

What's the Hype Around Readium LCP

Social Media and the Indie Author

Social DRM: When Adobe and Readium Are Too Restrictive

Sign up for a free 14-day trial to join EditionGuard and start selling your eBooks online.

The Ultimate Guide To Self Publishing

Learn how to successfully self publish your books online. 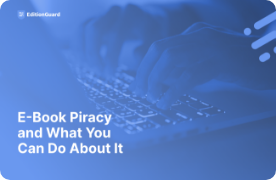 eBook Piracy & What You Can Do About It

A must-know guide on how to protect your ebook from unauthorized distribution online.